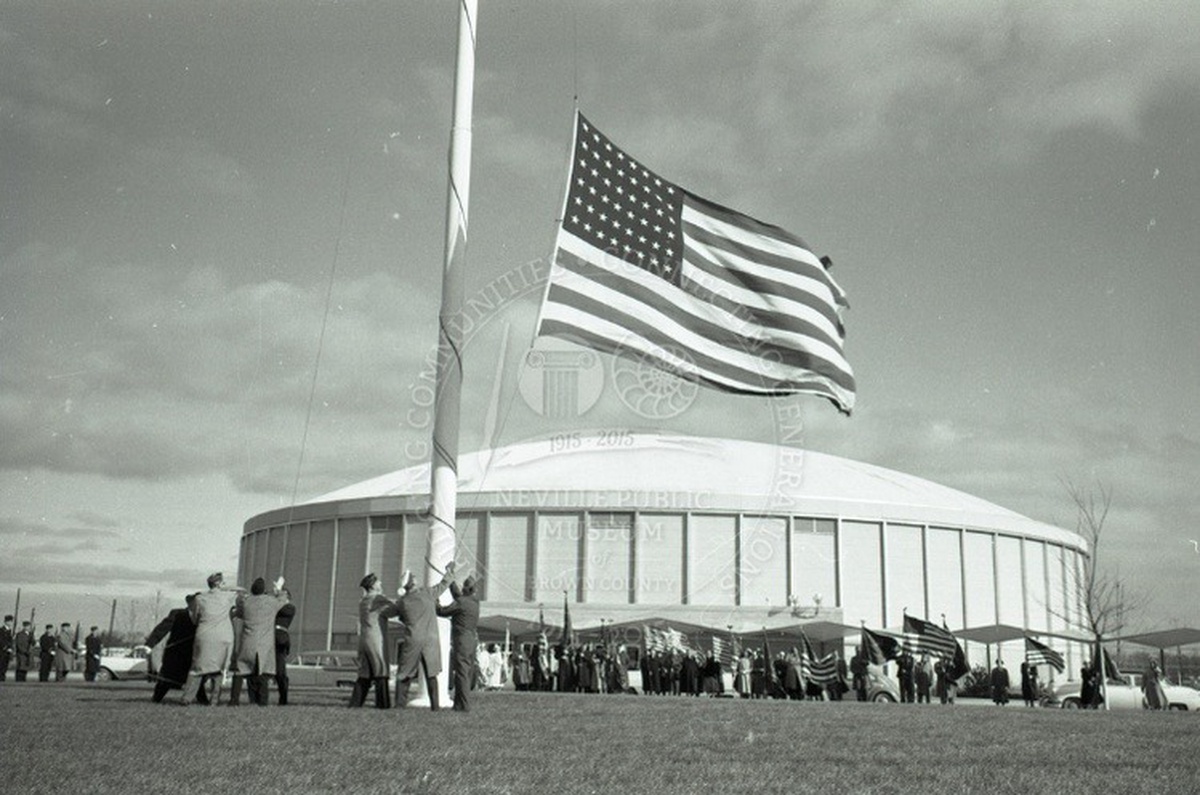 Many people may not realize what it took to build the Brown County Veterans Memorial Arena. The backstory of trying to find the right war memorial fit for this community is a fascinating tale. But a lot of it rings true still to this day. Much like my vision for the STEM Innovation Center, or even the new Resch Expo Center, it was born out of an idea, a concept, a belief that Brown County needed to honor our veterans who fought in World War II.

Initially, the Brown County Board believed the best way to go about creating a war memorial was to divide up a pot of money among municipalities – at the time that was the cities of Green Bay and De Pere, and the villages of Pulaski, Wrightstown, and Denmark. That amount was $150,000 – which in 1945 was a lot of money. However, none of them really could come up with anything. So the next year, the Green Bay City Council unanimously approved creating their memorial in the form of a combined new city hall and auditorium.

In those days, the largest indoor venue was the Riverside Ballroom. But our leaders wanted to
think bigger, attract larger shows and conventions, and bring visitors to our community while
giving residents the ability to utilize a venue for ice skating and other recreation.

Of course, much like today’s politics, things moved slowly. Studies were conducted, discussions continued, and leaders ultimately decided that a project of this magnitude should be a County-wide endeavor. So, in August of 1954, a County Board Supervisor named Leonard Jahn organized a meeting of all the veterans groups in the County to talk about this grand idea. A shared belief was crafted at that meeting that a multi-purpose arena would best serve the interests of the people of Brown County.

Over three years later, Brown County cobbled together the $1.8 million it would take to finally break ground on September 22, 1957. At that time, the plan was to formally dedicate the Brown County Veterans Memorial Arena on, fittingly, Veterans Day, November 11th, 1958.

It may seem like it took a long time from when the idea of a memorial for our veterans was born to the actual opening of it – but the life of our community and the nation were rapidly changing and evolving.

In 1945, World War II was coming to an end, Harry Truman became the President following the death of Franklin D. Roosevelt. The first ballpoint pens sent on sale for $12.50 apiece. Two years later, the Polaroid Camera was first demonstrated, the U.S.A. broke the Sound Barrier, the Cold War began, Jackie Robinson broke the color barrier and played for the Brooklyn Dodgers while movie theaters saw the premier of “Miracle on 34th Street”.

By the time the Arena opened – NASA had been established, including the launch of several satellites, the Microchip and Computer Modem were invented, Elvis Presley was a national sensation and causing controversy with his appearance on the Ed Sullivan Show, a 14-year-old named Bobby Fischer won the U.S. Chess Championship and the Baltimore Colts won what many consider the game that pushed the NFL into a top T-V attraction when they beat the New York Giants 23-17 in overtime to win the championship.

Speaking of the NFL, around the same time Green Bay and Brown County were discussing the Veterans Memorial Arena – the other hot topic was where to locate the new Packer stadium, or City Stadium, as it was known then. A story in the Green Bay Press-Gazette from December 21, 1955, talks about a pair of business groups pushing to locate the new stadium on the city’s west side and the came up with 5 advantages to that location. Reason number 5 given is, and I quote, “The stadium might be tied-in with the proposed county Veterans Memorial Arena.” Amazing, especially given that 60-plus years after, we talked about the desire to locate a new Expo Center on the Arena site because it might be tied in with Lambeau Field.

In the end, the goals and purpose of the Veterans Memorial Arena were met far beyond those expectations of the mid to late 1950’s. The attractions, the events, the fun, the excitement, the memories – all worth more than every penny invested to create a venue dedicated to both honoring our men and women in uniform and for community enjoyment and pride.

But the time has come to turn the page – to utilize the same goals and purpose set by those community leaders over 60 years ago for future generations. The new Expo Center will be a venue dedicated for the dual aspirations of honoring our veterans and creating a venue where our community can both adore and take pride in. It is now as it was then – the objective of top quality of life amenities so that Brown County can continue to be a wonderful place for everyone to live, work and play in.

On January 20, 2021, Brown County officially opened the $93 million, state-of-the-art Resch Expo, located directly across the street from Lambeau Field, home to the NFL’s Green Bay Packers. It is one of the busiest corners in the northern half of Wisconsin.

Completed on time and on budget, the 127,000 square foot Resch Expo is constructed on the site of the former Brown County Veterans Memorial Arena and Shopko Hall, next to the Resch Center. The Brown County Veterans Memorial was a critical factor in the design of the Resch Expo. The decision to better integrate the monument into the newly envisioned plaza made the memorial the centerpiece of this featured public space.

Resch Expo’s innovative multi-purpose design also means it is prepared to host multiple events at one time, minimizing downtime between shows due to move-in and move-out, also known as “dark days.” Eliminating dark days creates the potential to utilize a facility to its full potential, bolstering business for surrounding developments and increasing the potential for economic impact.

This facility builds upon Brown County and Greater Green Bay’s robust tourism economy, ready to host a wide variety of trade and consumer shows as well as sporting events and concerts. In 2018, travelers to our community spent almost $700 million, leading to business sales of over $1.15 billion and employment of more than 12,000 people.

Resch Expo’s design created connections between buildings as well as between nature and the built environment – the abundance of glass windows creates a sense of transparency and access, blurring the lines between indoor and outdoor and welcoming in the distinctive Wisconsin landscape.